With the world’s population increasing day by day, mass-produced beef where the animals are living in harsh conditions and fed antibiotics diminishes the nutrient value of the meat.

Grass fed beef, known to be one of the more nutrient-dense proteins on earth, has a remarkably higher micronutrient profile compared to grain fed beef.

But what steers most people away from exclusively eating grass fed products is the price tag.

So do the benefits of grass fed beef over grain fed outweigh the monetary sacrifice?

In this article, we’ll talk about:

What is Grass Fed Beef?

Naturally, cows are supposed to spend their entire lives feeding on grass in open pastures. But since there’s a much higher demand for meat, cows today are born and raised in gruesome conditions known as “concentrated animal feeding operations” or CAFO.

These massive facilities are where most “grain fed” beef come from. The cows raised from these facilities are fed whatever makes them fattest in order to cash in the most money.

Grass fed beef come from cows raised on a forage diet their entire lives.Instead of moving the cows to a CAFO where they’re fed grains and other unnatural foods, grass fed cows will live their whole life on a pasture and forage diet[*].

You may have seen the terms “free range” or “grass fed” on packages of meat but never thought it made a difference. In fact, you might even think it’s just a marketing tactic to get you to buy more expensive meats. But once you understand the crucial differences between grass fed and grain fed beef, you’ll think twice the next time you go food shopping.

With our population reaching almost eight billion people, the demand for meat has increased monumentally. And higher demand means the meat industry has to find ways to produce more product efficiently.

In CAFOs, cows often get sick. They’re in confinements that are often filthy. They have exposure to dead cows and because of the confinement and close quarters, they’re in constant contact with other sick cows.

So when a cow gets sick in a CAFO, they’re given large amounts of antibiotics to prevent illness from spreading to the other animals (often uselessly).

Not only are you consuming these antibiotics when you eat conventional meat, but you’re also taking in a hit of hormones unnatural to your body. That’s because in CAFOs, cows are pumped with hormones to make them grow bigger and faster (making these factory farmers more money).

Cows raised in CAFOs can grow up to a whole year faster than a cow that’s fed grass because of these hormones.

And just like humans, when animals are stressed, they also produce the stress hormone cortisol. When cortisol is produced the cows get fatter and produces tougher, flavorless meat.

Not only that, but when you eat meat from such a cow, you’re ingesting those stress hormones. Stress hormones that were not naturally produced by your own body to protect itself from the stress.

All of this treatment and medical intervention traditionally raised cows are subjected to is for the purpose of keeping farming costs low.

Some reports have witnessed cattle farmers going so far as to feeding cows gummy worms, marshmallows, chocolate bars and bits of hard candy to reduce feeding costs and reduce the costs of meat[*].

This means grain fed cows are typically filled with toxins that can potentially carry over into your own body after ingestion.

On the other hand, grass fed beef comes from cows that graze on pasture and eat what they’re supposed to: grass. Grass fed production has a more intricate process to follow due to strict guidelines that guarantees high-quality, organic meat.

Since grass fed cows are grown in safer, more sterile living conditions, the quality of the beef turns out to be far superior compared to grain fed beef.

And because grass fed cows are raised with extra care, free of hormones and antibiotics, the beef produced has a significantly higher amount of nutrients and healthy fats.

The Benefits of Grass Fed Beef 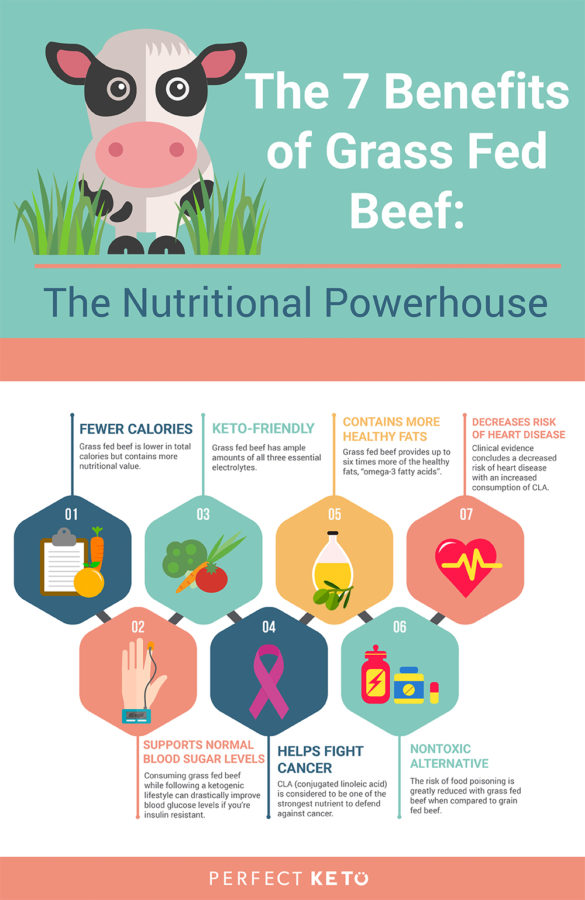 “If you eat a typical amount of beef per year, which in the United States is about 67 pounds, switching to grass-fed beef will save you 16,642 calories a year”, Jo Robinson says in his book “Pasture Perfect”.

There are about 3,500 calories in a pound of body fat, so if you were to swap out conventional beef with grass fed beef, you’d lose almost five pounds just from making that one simple change. CLICK TO TWEET

Grass fed beef is lower in overall fat content because their diet is more natural and clean. Plus, as we already mentioned, cows raised in CAFOs also go through a lot of stress. When stressed they produce cortisol which leads to fattier meat.

Although it would cost approximately $300 more a year, the amount of calories you can save is staggering.

Aside from increasing your CLA consumption through grass fed beef, following a ketogenic diet has become a staple for people who are struggling with insulin resistance and keeping blood glucose stable.

Utilizing a low carbohydrate, high fat ketogenic diet simply eliminates the need for your body to produce excess amounts of insulin in order to regulate blood sugar and maintain steady energy levels throughout the day.

One common issue with people who begin their keto lifestyle is the keto flu. This can occur when electrolytes aren’t replenished once they’re flushed out. The three main electrolytes are sodium, potassium and magnesium.

CLA is known for its beneficial effects in the prevention as well as treatment for several diseases like obesity, diabetes and cancer[*].

CLA is considered to be one of the strongest nutrient to defend against cancer.

A study conducted on women who were provided high amounts of CLA-rich foods had roughly a 60% lower risk in breast cancer over those who had little to no amounts of CLA in their diet[*].

Research done on laboratory animals who were given a very small amount of CLA – less than 1% of daily caloric intake – provided a reduction in tumor growth.

Most naturally occurring nutrients containing anticarcinogenic properties are derived from plant foods. CLA is unique because it’s one of the only anticancer nutrients derived from meat, with grass fed containing more than grain fed.

While these fatty acids are more prevalent in fatty fish such as salmon, grass fed beef can be a great alternative.

Here are some of the benefits from increased Omega 3 consumption:

Because the majority of the brain is made up of fat, consuming more healthy fats can help relieve several neurological disorders.

More than half of all antibiotics sold in the United States go directly to livestock such as cows. As we’ve mentioned earlier, the diet and lives that grain fed cows undergo is extremely poor.

The risk of food poisoning is greatly reduced with grass fed beef when compared to grain fed beef.

One of the largest studies conducted by Consumer Reports analyzed 300 packages of ground beef. They found an antibiotic-resistant bacteria, methicillin-resistant staphylococcus aureus (MRSA) in three of the grain fed samples and zero in the grass fed packages.

Additionally, they found 18% of the non grass fed beef samples containing superbugs – bacteria that is resistant to more than 3 types of antibiotics – compared to only 9% of beef samples from grass fed livestock[*].

Clinical evidence concludes a decreased risk of heart disease with an increased consumption of CLA, a nutrient abundant in grass fed beef[*].

You’re definitely not going to see that type of nutrition in grain fed beef.