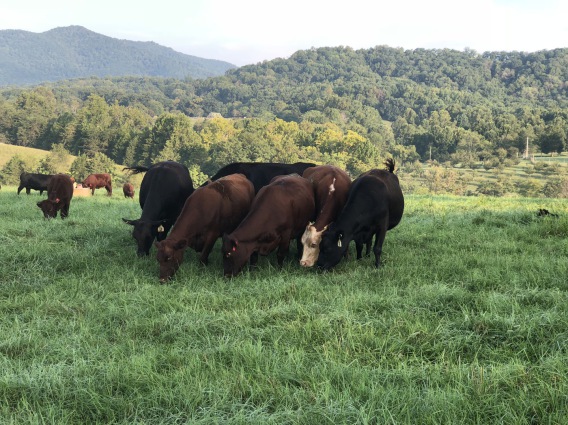 In Virginia, we are blessed with a long growing season and a variety of temperatures and precipitation seasons. Our soils are mostly clay so they have their own challenges but you have to love the one you’re with. Through years of over-farming and single pasture mentality, Ivy croft had its work cut out for a soil replenishment plan. We started by using rotational grazing and moving the animals every day by single poly wire, after a year of doing that and seeing the results we moved more into the fixed pasture sizes and expanded our herd. When the herd reached a suitable size we were carrying 1:1 AU per acre. That is an incredible number considering the conventional number is 2 acres per cow. So we double our carrying capacity.

The second phase was to expand and purchase more of the neighboring farmland. Knowing that we have a working model and expanding it seemed only natural. Now moving from 163 acres to 325 we were excited about raising more cattle in an all-natural way. After the expansion, we started using a no-till drill to implement better varietals of grass and legumes into our pastures to improve their productivity. Phase 3 was to buy the rest of the farm so we are at roughly 400 acres and all into producing excellent cattle. We have the right type of pasture for our system and are raising the right type of cattle to flourish in the system. All of these variables have to come together to create a successful cattle operation if one of them is out of whack then the whole thing comes apart.

Fescue comes with every farm I have seen cattle on. So there was no need to add more of it. what we instead focused on was adding other varieties and especially more legumes to add nitrogen to the soil without fertilizing. The legumes also offer the cattle a source of higher protein forage and the body condition scores point directly to the diversity.  We have a great mix of pasture plants that grow at different times of the year so as the cattle move through the pastures that are reseeding and mowing them down. We cover crop in the winter with Abruzzi Rye, Winter Wheat, and Oats. The additional organic matter that this adds to the soils shows in the spring and also keeps the livestock noses down and doing their job instead of waiting to hear the truck coming to feed them. The Chart at the bottom of the page shows how we keep our animal's grazing fresh pasture on a year-round basis and our reliance on hay is coming to an end.

Fescue - Tall fescue is a persistent perennial bunchgrass that adapts to a wide range of conditions. It is tolerant of low pH, poor soil drainage and can endure drought situations well. Tall fescue adapts to most Virginia soils and forms a thick deep-rooted sod when managed.

Orchard Grass - Dactylis glomerata, also known as cock's-foot, orchard grass, or cat grass is a common species of grass in the genus Dactylis. It is a cool-season perennial C₃ bunchgrass native throughout most of Europe, temperate Asia, and northern Africa.

Switchgrass (Cave and Rock) - As a native Virginia grass switchgrass has a good place in our pastures. in 2019 we seeded a few pastures with it and were impressed with its summer potential and growth even through the driest summer in years. Cave In Rock is a taller variety of switchgrass that can grow up to 6′ tall, making it a useful component in waterways, native grass restoration programs, producing native prairies like the ones which once dominated central and eastern United States. Cave In Rock is also a very popular variety when used in wildlife plots as a food source, blind and nesting area for wildlife.

Italian Rye - Lolium multiflorum is ryegrass native to temperate Europe, though its precise native range is unknown. It is a herbaceous annual, biennial, or perennial grass that is grown for silage, and as a cover crop. It is also grown as an ornamental grass.

Timothy - Timothy-grass is an abundant perennial grass native to most of Europe except for the Mediterranean region. It is also known simply as timothy, meadow cat's-tail or common cat's tail. It is a member of the genus Phleum, consisting of about 15 species of annual and perennial grasses.

Switchgrass - Is a warm-season perennial to help with the summer slump of cool-season varieties. Panicum virgatum, commonly known as switchgrass, is a perennial warm-season bunchgrass native to North America, where it occurs naturally from 55°N latitude in Canada southward into the United States and Mexico.

Bermuda Grass -  Is a warm season, perennial grass that has been found growing in many native forms all over the world. Bermuda grass is a drought-tolerant, fast-growing, full sun grass and can grow on soils of low fertility as long as they are well-draining. This is a tenacious grass and in one form or another is found growing in approximately one-third of the USA at this time (warmer areas).

Duo Festolium -  Is like ryegrass, but better! It combines the quick establishment, high feed value, production, and palatability of perennial tetraploid ryegrass with the extra persistence and summer productivity of meadow fescue. Duo has a high sugar content that is easily digestible, allowing animals to gain a high-energy ratio for milk/meat conversion.

Bluegrass - Bluegrass is a high-quality grass that is well adapted to the Virginia soils. It is a versatile grass that can be used for pasture, seed, sod, turf, and hay.

Red Clover - Trifolium pratense, the red clover, is a herbaceous species of flowering plant in the bean family Fabaceae, native to Europe, Western Asia, and northwest Africa, but planted and naturalized in many other regions.

Starfire II Clover - Starfire II is an exciting new medium red clover that was bred for multiple harvesting for multiple years.  Starfire II combines high yield, improved persistence, a strong disease package and the ability to be cut three to four times per year. It is an excellent choice for top dairy or beef producers.  Click here for a tech sheet on Starfire II Red Clover.

Ladino Clover - Trifolium repens, the white clover, is a herbaceous perennial plant in the bean family Fabaceae. It is native to Europe, including the British Isles, and central Asia and is one of the most widely cultivated types of clover.

Kopu II Clover - Was selected for stolen density, persistence under grazing, high yield, and large leaf size. This was achieved primarily by selection under cattle grazing in the northern United States and sheep grazing in New Zealand.

Alfalfa 407 TQ - Is a very high-yielding variety with superior disease resistance. Gro-Zone coating locks in the fungicide treatment as well as the nitrogen-fixing bacteria. This coating also results in better germination. 407TQ has a winterhardiness rating of 1.7 and a fall dormancy rating of 4.4. It works well in reduced tillage, tolerates manure applications, and handles stress very well. 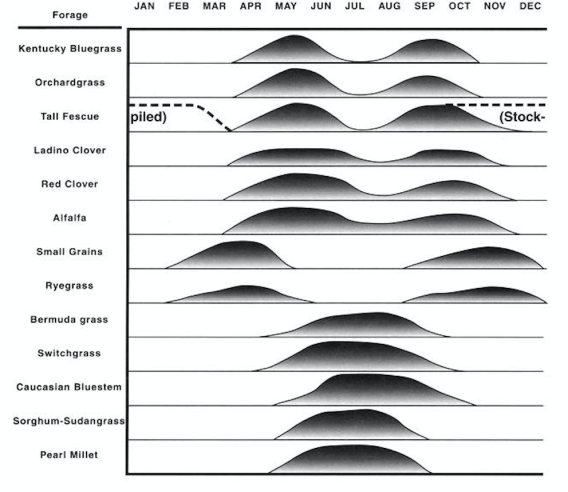